“True compassion means not only feeling another’s pain but also being moved to help relieve it.” ~ Daniel Goleman 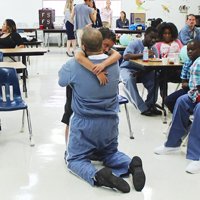 Here is how it happened for one father and son. Sammy* couldn’t wait to get on the bike and take a picture with his dad. They were having fun together.
But Sammy was so intrigued by the bicycle generator and how it worked that he quickly became my engineering techician. He took voltmeter readings of the battery, he helped troubleshoot where we might have had loose wiring when the blender wouldn’t blend, and he coached the other kids. He was learning and leading. 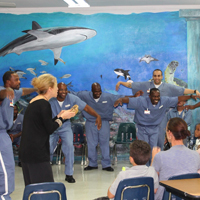 Then something unexpected happened. Sammy’s dad was in the skit “When Dad Gets a New Address. His dad and the others in this group created the skit in Ms. Lombardo’s Arts Expression Group. (Lela Lombardo is a COI core team member doing amazing work.) When Sammy heard the actors portraying a son and his interaction with his incarcerated father, he blurted out, “I miss my dad too” and began to cry. When the skit was over Sammy and his father had time to talk about how they really felt about the circumstances facing them over the next few years.

As we move forward into the next phase of KidPower2015, I am excited by the possibilities. Before the bicycle generators make their journey to the Light of Future School #1 in Cambodia, we will take them on other visits across the State of Florida releasing more kinetic energy in kids and their parents!

To read more of Linda’s blog go to iamthriving.org